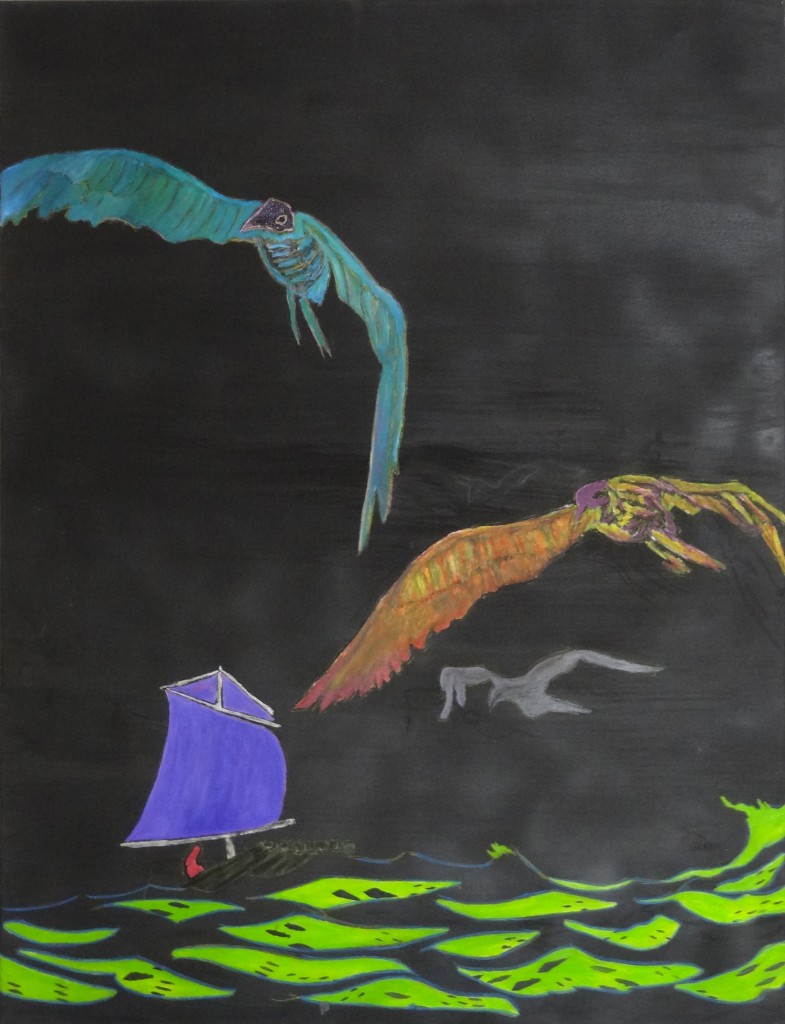 The robinsonade in the dark of night on a raft with a violet sail does not present the painter himself but a double as kind of a messenger of imagination. The rafting took place as a mission across the Pacific Ocean. The painter as well as his double had refused for some time to acknowledge that on the great seas rubbish was circling in an expanse as large as Western Europe. Therefore the painter being much in favour of a friendly environment sent out his double to verify those rubbish dumps. The double never returned. It has been missing for quite some time. The technical device which had been on board may have either become defect or the captain had stopped it intentionally. So the painter had no news of his double although the man had promised to send news even in a worst case scenario. Mariners who take similar routes on big container ships are said to have seen settlements on some of the big dumps in the far distance.
Seaman who the painter consulted in a harbour city reported they had once seen a weird kind of parading in the distance looking somewhat like a carnival. In front of the procession an individual had been strutting who looked as though he had not had a shave for several years. Not even with field glasses had the seamen been able to discern the face of the man distinctly on account of his huge beard. What had been discernable was a large crowd of women and girls following him on wagons crowned with wreaths and flowers. The eerie thing about it was: all the girls had fishtails instead of legs. The procession had been so long that the end of it had not been visible. A strange knell the men said was ringing out in the distance. One of the sailors declared that it was probably one of those ocean weddings which had been reported to happen very frequently now in these latitudes: The mermaids left their grounds by the dozens changing spheres in order to evade the debris of the littered ocean floors. When the huge container ship changed course only a bit to get nearer to the island it retreated with great velocity so that following turned out to be hopeless. The slightest change of course of the big ships is extremely costly.